Astrology history of nukes and Fukushima

What we know about the Fukushima nuclear disaster

An earthquake occurred on March 11, 2011; a tsunami hits approximately 50 min later. At the time of the incident, reactors 4, 5 and 6 were shut down for periodic inspection. Reactors 1, 2 and 3 underwent an automatic shutdown. 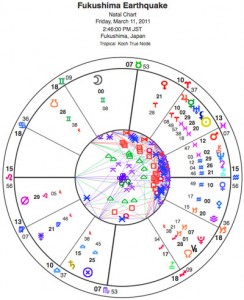 The tsunami flooded the basement and disabled the emergency power generators. Reactor 4 is shut down on March 11 and the fuel rods are transferred to a spent fuel pool on upper floor of the building. 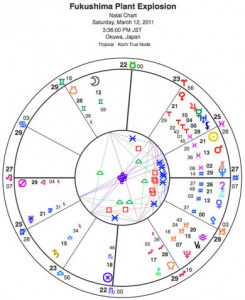 On July 22, 2013 it was announced that radioactive water, leaked from the damaged reactors, had likely seeped into an underground water system and escaped into the Pacific. TEPCO had previously denied this was happening, even though experts had suspected it.

It is revealed that the leakage has been going on since the accident initially occurred. As a result, Prime Minister Shinzo Abe ordered the government to step in.

On Aug 30, 2013 it’s announced that 300 metric tons of heavily contaminated water leaked from a storage tank, the leak is assessed as a level 3 on the International Nuclear Event Scale. On August 26 the Japanese government decides to take over; TEPCO is deemed unfit to handle the situation by itself.

Currently an estimated 300 tons of toxic groundwater is flowing into the Pacific Ocean daily. The water comes from the nearby mountains and flows beneath the crippled and leaking power plant and into the sea (400 tons total; 300 goes into the ocean).

Three reactor cores have “gone missing” since the accident occurred. It’s believed that the cores have melted through the basements of reactor buildings 1, 2 and 3. The melted cores are called corium lavas. There is debate about whether or not the melted cores have penetrated the concrete barriers beneath the reactors.

If they enter the water table below the plant, it would result in more widespread contamination of the pacific, and possibly drinking water in surrounding areas . It is suspected that this may have already happened. Reactors 1, 2 and 3 experienced full meltdowns when the crisis began.

In order to keep the damaged reactors cool, 400 tons of water is injected each day. Half of the water is recycled and the other half is stored in above ground containers behind the plant. TEPCO expects to store some 800,000 tons of radioactive water by 2016.

New storage tanks are quickly built to accommodate and are already leaking. Millions of gallons of contaminated water are being held on site (330,000 metric tons in 1,000 above ground tanks).

A recent typhoon that swept Japan has caused the release of radioactive water into a nearby ditch, which increases the risk of contaminated water flowing into the sea. The containment vessels essentially began to over flow.

Just after this, radiation levels in a well near a storage tank had risen 6, 500 times higher than previous readings. 400,000 Becquerels per liter of beta ray emitting radioactive substances were detected at the site.

To stop the flow of contaminated water into the ocean, there is a current plan to build an ice wall that will consist of 1,500 super cool liquid-filled pipes that will encircle the damaged reactors.

Critics say that the project is too costly, will use up too much energy, and may not actually work. Aside from this proposal, there is no other way to stop the contaminated water from entering the ocean.

Possibly starting toward the end of November, TEPCO will begin the removal process of approximately 1,533 fuel assemblies from the spent fuel pool above the damaged Reactor 4 unit. The projected date was Nov 8, but the project has been delayed for testing purposes.

During the explosion in Reactor 2, in March 2011, Reactor 4 was damaged, and the fuel pool is filled with debris. The debris and the fuel rods must be removed.

The fuel rods are normally removed using a computerized crane that memorizes the location of each one. Due to the explosion and the damage, the rods are no longer in their usual place, and must be removed manually.

Collectively, the rods contain enough radiation to equal 14,000 times the amount released by the atomic bomb that was dropped on Hiroshima.

The damaged fuel pool is deteriorating and is highly vulnerable to any natural or man-made disaster—removing these rods is a time sensitive operation, anything could trigger an explosion (the rods contain deadly Plutonium).

If the rods are dropped, broken, or if they touch one another during the removal process, an explosion, meltdown or fire could also be triggered. The removal process is estimated to take one year. One false move could result in a potentially apocalyptic scale catastrophe affecting the entire northern hemisphere.

Fish caught off the coast of Fukushima are testing positive for the presence of radioactive cesium, levels have not declined since accident occurred—indicating that radioactive contamination is continuously entering the pacific.

A study by Standford University detected low levels of cesium in Bluefin tuna caught off the California coast—the contaminants were traced to Fukushima. A Japanese study conducted by Kinki University analyzed the same samples and confirmed the presence of cesium. The FDA is not testing for fish in the United States.

Reports of sick and dying starfish have recently been reported off the coast of Washington state. An independent biologist claims to have discovered herring that are bleeding from their gills, bellies and eye balls around northern Vancouver Island. These incidents have not been officially linked to Fukushima or radiation.

Reuters recently released an investigative report focusing on the exploitation of workers at Fukushima. It has been revealed that workers are given very little pay and are deceived into working in highly radioactive areas.

Unscreened and inexperienced subcontractors, desperate for work, are farmed out to clean up the mess at Fukushima. Many have ties to organized crime. Workers are ordered to decontaminate nearby towns and villages.

Radioactive particles are scrubbed from houses and buildings or cleaned with pressure hoses. An area of 930 square miles around the plant must be decontaminated for residents to move back in.

Highly radioactive dirt, top soil, leaves, weeds and debris from the surrounding areas are being collected by workers and placed into bags, stored in a town within the 20 km “no-go” radius of the Fukushima site. The contaminated debris is piling up on driveways and empty lots.

**On November 18 TEPCO began the removal process of fuel assemblies in the reactor Unit 4 fuel pool at 3:18 PM. 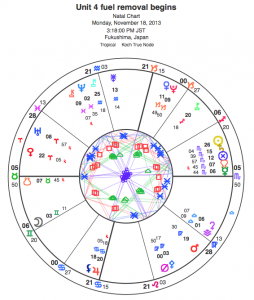 TEPCO is perpetuating the same mistakes which led to the meltdown in 2011, leading to massive spills and buildup. The government plans to build an ice wall to keep groundwater from flowing into radioactive buildings.

TEPCO will attempt to freeze contaminated groundwater in early 2014 to prevent anymore spillage into the Pacific.

Fukushima – A Global Threat That Requires a Global Response

Three reactor cores have gone missing; it’s believed that the melted cores passed through the basements of buildings 1, 2, and 3. Corium lava from the missing reactors may have entered the aquifer below the plant—could potentially cause a hydrovolcanic explosion.

Fukushima workers commented on Twitter that the recent typhoon caused a slope in the Fukushima plant area to collapse.

Prime Minister Shinzo Abe reiterated his view on the Fukushima power plant. He has now stated that the effects of the contaminated water are completely blocked, and the levels of radiation are well below safety limits.

Two storms, Francisco and Lekima will hit the east coast of Japan Thursday, Oct 24. The storms may collide, effecting each other’s path and strength. Possibility they may change course.

RT: Pump and pray: Tepco might have to pour water on Fukushima wreckage forever: http://rt.com/op-edge/tepco-fukushima-sea-water-reactor-194/

Fukushima moves radioactive water as it braces for Typhoon Francisco

TEPCO proposes moving contaminated water into underground facilities to prevent another disaster from the approaching typhoon.

Fukushima 2020: Will Japan be able to keep the nuclear situation under control?

Prime Minister Shinzo Abe assures the Olympic committee that “everything is under control”. 22 fuel rods will be extracted at one time during the removal process at unit 4. Article explains the challenges of the clean-up process, and presents details regarding the removal of fuel rods from unit 4.

Workers are manipulated into working in highly radioactive zones with very little pay.

Risky Repair of Fukushima could spill 15,000 times the radiation of Hiroshima

The challenges facing TEPCO require the cooperation and resources of the global community. The project involves moving spent fuel from Reactor Unit 4 with the radiation equivalent to 14,000 times the amount released by the Hiroshima atomic bomb.

Insight: After disaster, the deadliest part of Japan’s nuclear clean-up

TEPCO faces difficulty in removing the more than 1,300 rods from Unit 4. The removal process begins in November and TEPCO expects it to take a year to complete–explains the risk of inadvertent criticality.

A computer controlled process that memorized the locations of the rods down to a millimeter would normally handle the removal. The rods must now be removed manually, generating the risk of dropping or breaking them.

TEPCO will begin removal of 1,500 fuel rods from a damaged containment pool in November.   The fuel rods, if mishandled, could cause a major explosion and worldwide environmental disaster.

The operation will start at the beginning of November and will be completed by the end of 2014. TEPCO planned to take two years, but reduced it to one. The full decommissioning process of the plant will take 40 years.

TEPCO had planned the removal process for mid-November, but has nearly completed preparations and will begin earlier. The spent fuel will be placed in containers and taken 100 meters away and housed in a different building. No. 4 fuel tank contains 3, 331 spent fuel assemblies and 202 unused.

A Mistake Now Could Release 14,000 Times More Radiation than Hiroshima

A team of thousands prepare for the risky operation of removing spent fuel rods from reactor 4.

As early as November 8, TEPCO plans to remove 1,300 fuel rods from reactor 4 containing 14,000 times the radiation from the Hiroshima bomb.

Caldicott: If Spent Fuel Pool No. 4 collapses I am evacuating my family from Boston (VIDEO)

Dr. Helen Caldicott states she will move her family from Boston to Austrailia if the spent fuel pool in building No. 4 collapses.

4 out of 22 assemblies have been removed.

An independent biologist claims to have discovered herring that are bleeding from their gills, bellies and eye balls around northern Vancouver Island. Viral infection has been suspected as the cause.

The Globe and Mail: http://license.icopyright.net/user/viewFreeUse.act?fuid=MTczOTIxMjY%3D

Radiation from Fukushima disaster not an issue for Florida tuna fans

In early October scientists tested 50 migratory Bluefin tuna caught off west coast of Califorinia, 33 were found to be contaminated with cesium 134.

FDA claims no need to test Pacific fish for radioactivity

FDA claims there is no threat of serious contamination of fish as a result of Fukushima. No sampling or monitoring is necessary. An FDA spokesperson said that they have not been testing U.S. fish.

Despite claims that the fish are within safety limits, both South Korea and China refuse to buy Japanese seafood due to Fukushima’s nuclear pollution.

The Regional Ocean Modeling System (ROMS) is used to model of the effects of ocean currents on the contaminants from Fukushima.  The study shows that radioactive material will hit the Central Pacific and West coast of North America.

Cesium levels in fish off Fukushima not dropping

The contaminated water from Fukushima Daiichi power plant will affect the ecosystem for decades to come.

Fukushima’s Radioactive Water Leak: What You Should Know

Is Fukushima Radiation Contaminating Tuna, Salmon and Herring On the West Coast of North America?

Sockeye salmon numbers have plummeted in British Columbia and Pacific Herring found to be hemorrhaging blood.

Recent and past earthquakes 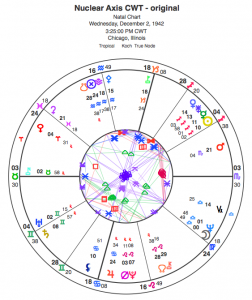 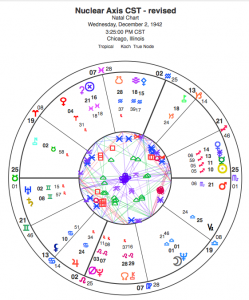 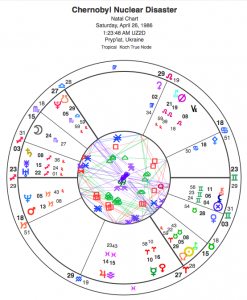 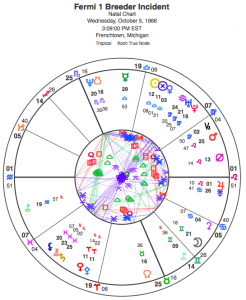 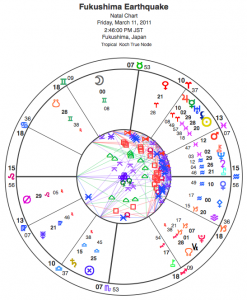 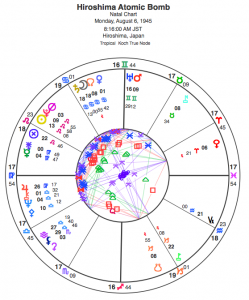 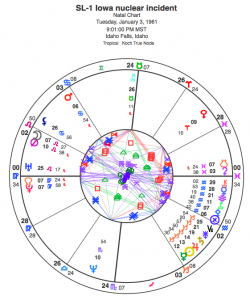 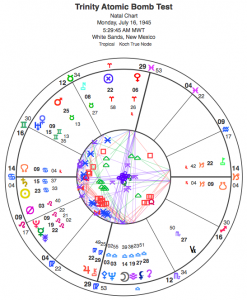