World-renowned astrologer Eric Francis began his career as an investigative journalist in New York, where he identified and wrote extensively about the history of global PCB contamination created by Monsanto, GE and Westinghouse.

He had heard of astrology years earlier, when he took his first job as a reporter. Above his desk was an astrological calendar, which sparked his curiosity. He developed his talent as an astrologer concurrently with his investigative reporting work. In 2004 he left for Europe to work for the legendary British astrologer Jonathan Cainer.

With his new book Revolution. Revelation. Reality Check now published and his website Planetwaves.net celebrating it’s fourteenth anniversary, Eric reflects on Delos and the ancient call that brought him there — and the recent Greek elections.

When did you first discover Delos? 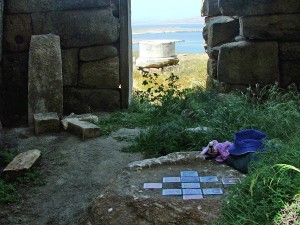 On Beltane in 2005 — the Celtic high sabbath of Mid-spring.

What drew you to the island in the first place?

It was an accident. I was on Mykonos, and I was talking to the owner of a souvenir shop. I mentioned that I was an astrologer. One of the great things about Greece is that when you say you’re an astrologer, people actually know what that’s about. It’s about the gods and goddesses. She asked me, “Do you know what’s just one mile away from here?” When I told her I had no idea, she took out one of her tourist books and showed me photos of the largest archaeological site in Europe. I was astonished, and on an early ferry the next morning.

As a world-renowned astrologer what is the importance of Delos to you personally?

First, I felt like I had been there before. I could hear the echoes of the lives that were lived there and the millions of people who came through. As I walked around, the place became more and more familiar. It was like no time had passed. To me, the ‘mythology’ of such a place is as real as anything, and as I visited the many temples, I paid tribute to the different expressions of deity who inhabited, and who still inhabit the place. I spent about three hours doing a tarot card reading in the Grotto of Heracles, and never saw another person. I went a good time of year, and had the place almost to myself.

Is this a common pilgrimage for astrologers?

It’s not common enough, but some astrologers organize visits to ‘power places’. Many years ago I went on one to Crete, but it didn’t have the depth of this visit. I needed to be on my own. My mentor and guardian, the late Patric Walker, lived on Rhodes, and he would send his students up to the acropolis there to commune with the gods. He had the right idea. We astrologers are in direct communion with them every day, and it’s a wise and beautiful thing to show up for them; to remind them you know they’re real and alive. You would be amazed how much they appreciate the most modest gestures of acknowledgment. I would love to teach astrology on Delos — stay in Mykonos and have the class ferry out every day for an astrology class and picnic.

What was your impression of Delos and the Cyclades in general?

Besides their simple beauty and their example of rustic Greek life, they are lands that stand out of time. They are old, and it’s amazing that they are still inhabited and even thriving; that life goes on. Greece is still Greece. These islands seem far removed from anything, yet Delos still vibrates with the cosmopolitan center that it once was. Mykonos has a lot of that feeling, in real-time. It was one of the few places I’ve visited where I thought: anyone could be here right now.

How would you compare your experience in Greece to that of other European countries? 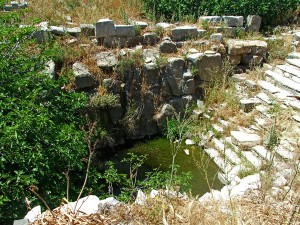 It’s the only place I want to kiss the ground when I arrive. They tell me I am Sicilian, which leaves a lot of room for having Greek blood. My mother feels the same way.

What is the most striking feature that sticks with you from your visits?

Two things: one auditory and one visual. Walking around Delos, I had the feeling of clairaudience. I could hear the whispers of the souls of previous times. We were there together. It was not a haunted feeling but rather one vividly alive. I knew that I was taking part in a kind of initiation, for having made the trip back. The other is that I had one of my first breakthroughs as a photographer there. As the ferry pulled up, I was on the verge of tears, seeing the place laying in ruins and yet I was amazed: it’s still here. I spent my three visits to the island that week photographing everything I could. The spaces opened up amd welcomed me, and the light was breathtaking. I can still see the colors.

Tell me a bit about the history of Delos from your perspective.

The story is beautiful: how it was a poor island that kept floating around the sea; mariners could not find it dependably. It was known for nothing particularly special, until one day Leto needed a place to birth her twins Artemis and Apollo. Everyone else feared Hera’s wrath, but the Delians were willing to host such a significant birth. Of course, they were promised that the island would become a hub of activity (which it did). It became something akin to Manhattan, only the place was devoted to the mix of devotion and trade. They were also promised some pillars that would anchor their island to the sea-bottom so it wouldn’t float around any more. As far as I’m concerned, those pillars are down there. And you have to love the place where the Sun and the Moon were born.

Things have been rough economically in Greece for a few years now, and this has spread into politics recently. What does the astrological chart of Greece say about how things are going in the country right now, and for the next few years?

For Greece, I am using the chart for the establishment of the democratic government in 1974. From this chart I can tell that the government and the notion of a modern democracy (very different than the much earlier concept of democracy, developed in ancient Greece) is going through some intense growing pains. The country is in a once in a lifetime turning point — and it’s a big one. There is an imperative to join the modern world, which is to say, to become part of progress, lest the country be crushed by progress. So you could call this a time of enforced growth.

In late June and early July, we will see the changes associated with the elections come home to roost. You can expect a lot of protests over the summer, though as everyone knows, that rarely changes anything. I think that this will, however, add to the pressure for there to be some kind of systemic change, which could look like chaos and fragmentation at first. I would say that the future is going to seem uncertain for the next three years or so, and then the dust and smoke will start to clear and the way forward will be more apparent.

There appears to be an entrenched political establishment that few people can feel clearly, though what’s interesting is how this shows up as something with its heels dug in emotionally. It’s as if reason and logic, once so revered in Greece, have been replaced by pathos and attachment to the past. And it’s precisely this kind of thing that’s being dismantled. The political structure fears for its own existence, but it’s dealing with forces of progress much stronger than itself. What you see in 2012 will only be a whisper of what’s developing for 2013 and beyond.

The revolutionary urge is coming on strong, and people need real ideas not only get through this but to have any notion of what to do with the future. A country is vulnerable when it’s going through changes like this, and there must be enlightened people speaking up in order to protect the society from infiltration by self-serving, negative or destructive forces.